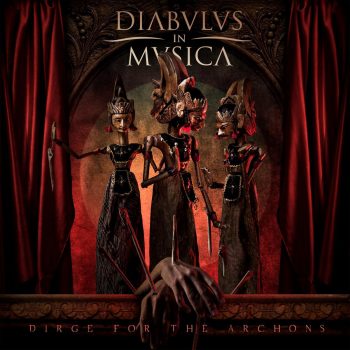 Often in the metal universe, a new album is somewhat of a Pandora’s Box. Or the bottle with the genie that, once released, won’t fit back into it.

Now, I had somewhat of an issue with Argia last time we looked at Diabulus in Musica. And the juicy comments from some punks from the Ministry of Love to get lost over it were interesting, too.

The dreary black career cliff a band must navigate around usually looms at the sophomore effort. With Diabulus in Musica it was the junior record that got them to this sorry chunk of rock.

I was thus a bit wary of what I would find in DiMs latest and best. But – lo and behold – the tune changed into something else. Loki be praised! More lively, rockier, lighter in taste, and much more substantial too.

Now, I heard it opined that Dirge for the Archons is not quite at Epica levels yet. In other words, they did not really ascend the Olympus of Symphonic Metal. Got stuck somewhere on its slippery and rocky slopes, it seems.

But the question is: Should they climb that particular mountain at all?

Because this might be the wrong Olympus after all. They may want to have their very own mountain.

Just look at the rapid pace their career progressed.

Diabulus in Musica started in 2006, but only issued their first album Secrets in 2010. Now six years and four albums later, they firmly established themselves. I’d call this rapid in anybody’s book. The lineup did not change since Argia either, which is actually good news. This gets us some continuity after the important changes that happened just before their last album was released.

Dirge for the Archons really sits atop a few styles and is much lighter in nature than its predecessor, or even The Wanderer. The highly overdone operatic theme that plagued Argia pretty much left the scene.

Symphonic Metal is still prevalent, but marries well with some Gothic Metal moments. Add to that some slick symphonic passages and the skillful use of a limited amount of cheese. In short, Dirge for the Archons comes across as more accomplished and lighter, even sporting some forays into Cinematic Metal.

The band also went out on a limb with a more heavily synthesized, keyboard-heavy take on a few tracks. And scarcer, somewhat curtailed growls offered by Gorka Elso. This as compared to The Wanderer and its pretty electronic approach already.

Well, the record turns out to be pretty good electronics, and not going down the slippery Amaranthe road. Zuberoa Aznarez delivers the most varied performance to date, too. Even if it is not the most energetic deal I have seen so far. A tad more belting in the rockier parts of the album would have done a world of good for the quality of the album itself.

Now – undoubtedly – there is Epica in their tune. But so are Nightwish or Delain, and other culprits in the Symphonic and Gothic Metal genre. And I guess the name-calling will continue to some extent.

Because this dirge firmly lodges within the genre and its nuances!

At first, it does not seem like that. The intro Battle of Atlantis unloads a fully operatic blasphemy on ye. So, with some trepidation, I waited for the follow-on. And wham, here it comes. Earthly Illusions thrashily attacks with pretty hard metal, not known to be made by this band so far.

Marble Embrace is testament to the aforementioned inclusion of a more poppy sound without getting overwhelming or overly silly. The rockier parts of the album kind of culminate in Crimson Gale, which pretty much sums up the moving parts of the record.

What about the rest?

You’ll find a new, cheekier side to Diabulus in Musica as well. Seemingly like something born out of Nightwish’s Imaginaerum, Ring Around Dark Fairies’ Carousel amazes with a light sound and an almost circus-like flavor.

Now, the whole second half of the album displays a much lighter, almost folksy ambiance. It is a pity they did not space the ballads a bit better throughout the track list. Because now this lands you with a pretty metal-laden first few tracks. Which then disintegrate into some dark fairy fantasy, as the mid-point suggests. But fear not, not all is lost! There are some moving metal parts left in The River of Loss.

In the end, Dirge for the Archons serves you with a mightily varied metal platter of goodies. And firmly ensconced in the Symphonic Metal genre they are, too.

I really appreciate that Diabulus in Musica moved away from their overly operatic ways into something much more anchored in metal. At the same time, the band delivered enough variation, some kind of bumps in the road to keep things interesting. And in truth, boredom is not something to fear on this record.

By doing this, they created themselves the best album yet in their 10-year career. Let’s see what comes next.