I had never heard of Lzzy Hale before and for sure nothing of a US band called Halestorm. Wassatt? A spelling mistake? Well, folks, joking stopped like right away when I started to listen to their first track on their album named after themselves. Where did this rock-hard bundle of energy come from, roaring out of my headphones with this take-no-prisoners attitude. Holy. Shit.

Since then they have my undivided attention and I have Lzzy Hale and her band in highest esteem. Halestorm produce high quality Rock of a kind that you will have trouble finding across the music industry these days. Produced and spit out with an aggressive venom that reminds you of Melodic Death Metal bands like Arch Enemy or Thrash Metal bands like Slayer.

Only, this here record ain’t no metal.

And I really like their swagger, which is just kind of cute. It is this sniveling, snarling passion that permeates the whole production. Some sort of ‘you can’t get rid of me, I WILL tell my story’ kind of approach.

Lzzy and her brother Arejay Hale started their gig in 1998 and from then on pretty much produced their own music. First with the help of daddy, but going standalone soon thereafter. The band went on tour for an eternity with their productions, but the operation really took off once they started with this here album Halestorm. The Strange Case Of… followed a few years later, but this is food for another review. 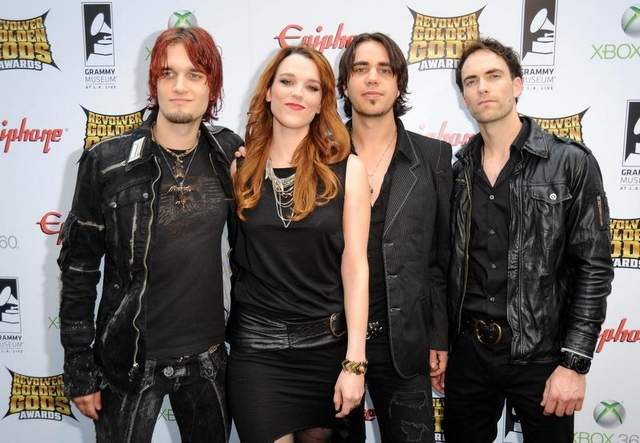 The record is a true attention-grabber. The tracks just roar out of the gate at some 350 mph, never mind the speed police waiting further down the road.

You’ll find no needless intros and outros that other bands are so fond of neither. Only straight and wildly fierce action right off the bat instead. To top it, their tune is of a maturity that can only be found in the very talented. And for sure hardly in bands of so young an age.

The first two tracks It’s not You and I get Off just take you along the journey, at a stiff pace and with a hot, rock infused fervor that I find refreshing. Then comes the somewhat more mid-tempo Bet U Wish U had me Back. But this one comes with a stellar refrain, describing some love affair that the lead seems to have had. In fact, a lot of the tracks handle Lzzy‘s different stations and situations in life.

The album is very varied, alternating between pure, red-hot and hard’n’heavy rock (with some metal injected at times) and slower tracks like Familiar Taste of Poison. However, the latter is much cornier than the rosier ones found in other productions, like in Into the Wild Life. Some of my co-reviewers opined that the slower tracks were produced to please the mainstream listener, but I would not go as far. Interestingly, this corniness in slow motion tracks found in Halestorm resurfaced in their newest production Vicious.

Actually none of the tracks on Halestorm are really bad, but the album somewhat loses steam toward the last third. Which – in itself – is not surprising. It would indeed be difficult to maintain that kind of power, at those high levels and right through all the tracks.

I am missing the stellar solos that garnish later productions like The Strange Case of… so well. On Halestorm the guitar work more goes for crunchy riffs than standalone noodling about the soundscape. True, there are some solos, like in Nothing to Do with Love. But let’s be honest, this is nothing to write home about. The record – sadly – produced a couple of duds, too, which severely pull the ratings down. Last, but not least, the overall production sounds a bit scratchy, even if the overall quality is pretty good.

As we now know, Halestorm have a lot more potential to deploy than what is on display on this first record. I still have hopes that they will move into a more metal-oriented arena. And – by doing this – kick this ship up a few more notches still.

But by and large, I really love this album. Got myself a copy back in 2010. And it still blazes out of the mighty music machine to this day from time to time. This is another band on the eternal RMR watch list. They have promise and already showed that they can increase spice in future productions. But this is a case for up-coming reviews.