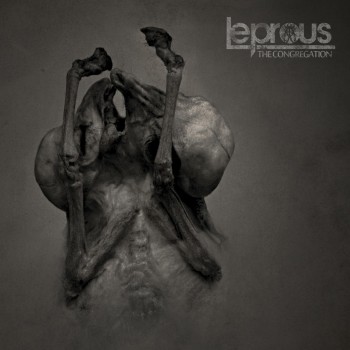 Boy, this is Scandinavian month @ RockmusicRaider – for sure. And with some more Progressive Metal to boot.

This time we are going deep down into the cold Northern fjords. The Norwegian Progressive Rock and Metal band Leprous have been on a roll over these past years. They churned out album after album rating highly with fans on the metal Richter scale. Their fourth studio album The Congregation serves us with a real tough cookie indeed. The whole concoction is – in style, not content – not unlike the Zierler début and – in part – somewhat reminiscent of Guilt Machine with their currently sole record. With loads of djents – of course – reminiscent of what The Hypothesis delivered.

The influence of Ihsahn aka. Vegard Sverre Tveitan and his wife Heidi Solberg Tveitan aka. Ihriel can be felt strongly. Which probably also explains the choice of the ugly cover of a dead dog or jackal, whatever the fuck it is. The cover was developed by French artist Nihil, living in Norway too. The style is right up his alley.

And there is a smelly underbelly to this record. Something dark and foreboding that does not come out right, something that just lurks somewhere in the background. A cold reptilian stillness that does not quite manifest itself, if you get my drift. Judging by the influence this band got and still is getting, I am not all too surprised.

Recording of the vocals happened at Mnemosyne Studios, owned by Ihsahn and Ihriel. She is the sister of Einar Solberg, by the way. So all that recording activity finally is family business.

Fascination Street Studios in Sweden, owned by Jens Borgen and Ghostward Studios covered the recording of the rest. The mixing and mastering, done at Fascination Street Studios, is pretty flawless and the outcome crisp and clear. This studio is – by the way – well-known in the scene and already put finishing touches on former albums of Leprous. As an example, the late album Under The Red Cloud from Amorphis was also given its finish at these very studios.

Now, nothing would work without Einar Solberg, the stellar vocalist pulling this ship forward. The Congregation may come across as a bit too Einar-ish, but then this is in the eyes of the beholder (more to that later).

Whatever the case may be, Einar is definitely one of the best Prog vocalists available to date. Baard Kolstad, working the drums delivers the second outstanding performance on this disc.

Einar Solberg and Tor Oddmund Suhrke(guitars, backup vocals on the record) wrote the lyrics on The Congregation, with Tor taking the brunt of the work.

And what have we found on The Congregation?

Well, not surprisingly, they stayed true to their style and delivered mostly Progressive Rock and Metal. Their penchant to inflict endless rhythmic hypnosis on their listeners for sure knocks a star or two off the rating. There are way too many endlessly repeated two and three note sequences in this record. I’d call this boring synthesizer work. A way to fill the massive void left by over an hour of extended Leprous.

Keyboards (meaning Einar again) are way too present as well. Almost making you forget the good work of their fellow musicians on this disc. And whatever happened to the guitars? Not very present throughout and this is a pity. Some more focus on that could have brought this record a very long way forward to stardom.

I also detect a certain lack of direction in The Congregation, too. Or perhaps a lack of arbitrary discretion when pulling the track list together. For sure, there are too many songs in this list and a certain censorship would have meant better quality. This also explains why after a few songs, the record grows flat. Like a beer without bubbles – and does not really rebound anymore.

Yeah, or perhaps it should be called simplistic in a way. The Price and Third Law will retain your attention. The latter with the line “Somewhere Someone must Bow / Despair Hidden Somehow” will get into your bloodstream and repeat in your brain endlessly. Both tracks are varied, a lot of change in the tune itself, launching new melodies at the most unexpected moment. Really well done – this is really great stuff.

But then Rewind kicks in. And frankly this is one track that should have fallen prey to censorship, albeit that it possesses a geeky kind of attraction.

Okay, after that not all has gone to pieces in the remaining long list of tracks: For example The Flood – even if it tries to bludgeon you to death with an ever repeating two-tone sequence, deserves some credit. Red, Moon go the same route, to an extent at least. And perhaps (with a lot of goodwill..)

Down can barely be accepted to enter the lauded halls of upper echelon Progressive Rock. The rest of them tracks are not really impressive and do not deserve the august air up there. Again, a more stringent choice of tracks may have been way more beneficial. Less is sometimes more, and for sure in this case.

So, has The Congregation shown an ability to kick Leprous’ former albums off their podium? The answer is no. Bilateral beats this album by far and Coal still takes the cake over this one too. However, this is after all still a solid and complex Prog album to behold.

But for the next one Leprous will have to think about how to kick it up a notch and get back up to speed again. There is pretty sharp competition out there in the progressive field and they are hungry. Very hungry.

But there is hope. The audience threw in their lot and voted this album onto the 10 Most Popular Posts @ RockmusicRaider. Very good.