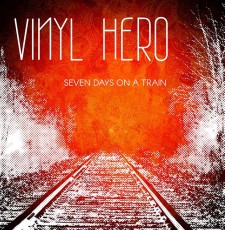 Do you like your Rock served together with a whiskey – well – on the rocks? Down by the bayou, sitting on the porch? Rocking chair and all? New Orleans style?

There ya go! You may want to check out Vinyl Hero. Crunchy, scratchy, somewhat jazzy and bluesy rock seemingly blowing over from times long past.

Only, they ain’t near any bayou, they dwell in Montréal up in Canada of all places. But never fear, they crunch about that gravel path of theirs like there is no tomorrow. In a way they sound something like a slower, mid-tempo, bluesy version of Bear Bone Company with a portion of Last Bullet. Even if that don’t quite cut it.

We are talking about their new EP Seven Days on a Train, due to be let out of its cage in May 2016. Captivating and refreshingly retro, their style really delivers. And it better be good at a very short 18-some minutes of solid vinyl turns.

Vinyl Hero formed in 2006. After going through a series of lineup changes, they released a first self-titled EP, then followed in 2013 by the much delayed album The 13 – the delay again caused by … line-up changes, so I understand. Kind of a bumpy road to fame. But as the saying goes: There is no fame without pain. And I really like the last result.

Did they succeed in their efforts to – and I quote: “…bring back the humanity and organic nature that was so prominent in the music of the vinyl era”?

Yeah, I’ll give them that. Should you buy the record? If you dig good, old-fashioned rock, absolutely. It will be worth your money!