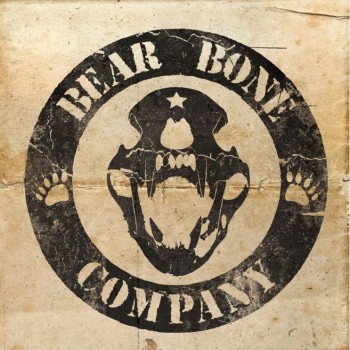 Well, you gotta give it to them: The Swedish band Bear Bone Company have got a swagger, making them strut around the scene to a point that they risk stumbling over themselves.

When I saw their somewhat meager, but decidedly juicy bio, I thought this better be THAT good. And you know what? I kinda like it.

The band joins us from Örebro in Sweden, but got a real California gone New Orleans look and feel. Or is it the fish salad at breakfast, very common in Sweden that causes this?

The band formed back in 2012 and they are now ready to go full length for the first time. And they do this in a powerful, but amazingly carefree style. Exactly the way this kind of tune should be performed. The Bear Bone Company does have its eternal hunting grounds somewhere in the ’80s buried in its Hard Rock and Hair Metal scene: Hints of Bon Jovi, some Rainbow, an inkling of Guns’n’Roses at times, yep the one with Axl fucking Rose. And do I detect some Mötley Crüe in there as well? By and large, a wild mix of things.

And you know, it’s all there.

Rock solid, heavy Hard Rock with some metal trappings to make it look prettier (no pun intended…). Their no-nonsense, bare bones style really rocks you around some. They got crunch, they got power, they got riffs. Stellar solos at every corner of their universe. They got pretty good pipes at work from the lead singer, reaching to quite stellar heights. I am very tempted to call this metal. Yet it is down’n’dirty Hard Rock of the whiskey fueled type as they claim, no doubt. And sometimes their tune reminds you of outfits like Vinyl Hero or Last Bullet.

Does the Bear Bone Company live up to the strut?

Well, hold on to your hat! Fade is nothing for the fading heart, it takes you on a wild ride. I really like the crunchy continuation in Kiss and Tell, perhaps a bit too cheesy in refrain, scavenging from the ’80s Hair Metal area. But again backed up by a riff that just makes me jump around the room, when I should be writing on my machine. Then we are graced by the catchy Don’t Belong. Okay, my evil twin whispers to me that this was made for the mainstream crowd to market it better. And – indeed – it already dwells on YouTube:

After that the record kind of loses steam, droning on until Hanging. And this is when the lead singer really unpacks his vocal cords. And I mean really unpacks them. Jeez. Why did we not get more of that before? And then they go Heavy Metal on you with Falling Down. Well, Drinking Time Again just got me to forget my beer I was drinking when first listening to the record and start rocking around. A powerful track.

The main shortfall of this album is not the production, nor the energy. There is plenty of that. It is the somewhat repetitive song structure of all tracks Bear Bone Company. And this is a pity, thinking about it – sometimes feels like too much Miller beer at one of those never-ending parties. After a while you lose the taste and just consume it. Then the front man sounds kind of underused at times, looking at his vocal range. They should have milked that one better to increase their sound quality.

And there is another issue: The marketing is just bad and I guess this is why they signed up to Sliptrick Records. Apart from the snazzy intro, there is nothing or not much. A few ill sounding soundbytes on the internet, a little bit of info here and there. Otherwise? Nada! Just to illustrate a little more, when looking for band members, this is what I find:

This is not a Black Metal outfit for fuck’s sake, so they need to get a little more visible. Playing the Invisible Man on the Hard Rock music scene just ain’t gonna earn you many brownie points, my dear friends from Sweden.

In conclusion, Bear Bone Company professed to play and I quote: “A highly modern stew of sweaty rock n’roll on the old-fashioned, heavy guitar dominated highway.”

And did they succeed?

Yes, definitely. This is fresh, crunchy and indeed old-fashioned Hard Rock, leaning into Heavy Metal with a vengeance. This is the kind of music these guys should play in the US, somewhere in between California and Louisiana. They got the sound that you want to hear on that crowded, hot beach, when the toads are croaking out in the bayou somewhere in yonder darkness.

But for their next offering they need to inject some innovation into their tune or their swagger will wear people out. More of the same will not do. Buy this one? Yes, definitely go for it – if you love crunchy Hard Rock with a Metal twist. Heavy Rock at its best, if you will. I am already looking forward to their next record.

And congrats, this record successfully made it onto the Intermittent Digest – Tome III.