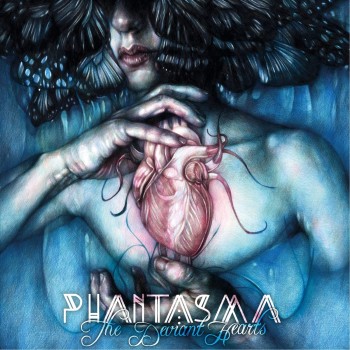 To ease my Death Metal injured ears somewhat, I started listening to some loftier and softer stuff. And stumbled across a band called Phantasma belting out a seemingly Nightwish-esque tune on an album called The Deviant Hearts.

The fact that the ever cute Charlotte Wessels (Delain) is the female front on this project really piqued my interest right away. Not because she is cute of course. But because she can sing and is one of the most respected professionals in the genre.

Which immediately shows in the quality they deliver.

Added to that come a felt gazillion of guest singers, rounding this all up some more. But it is the free-wheeling, refreshing spirit of the album itself that finally got to me. A sort of overarching freedom of creation – finally discovered and exploited – that permeates the whole album.

Well, first and foremost, the album is based on a story called The Deviant Hearts (okay, gosh….) and written by Charlotte Wessels herself. There you get the idea of a theme taken to the next level. It is of course not the first time that well-known musicians have taken a time-out from their usual haunts and went recording a concept album that is shaped after a story. Just think about Tuomas Holopainen (Nightwish) and Scrooge McDuck.

And a solid theme usually makes for solid songwriting. In this department, The Deviant Hearts is particularly well done, with three very talented musicians at the core, plus a score of others around them.

‘Tis no metal album in the proper sense, make no mistake. But more a strange mixture of epic Symphonic Rock and – well – an astonishing score of Progressive elements in there. Some of that comes sprinkled with some metallic salt, getting you this kind of flavor rendering their tune much more interesting. Now add some toppings in the form of subdued bombast and ready is your dessert.

And what about the theme?

The story is about two siblings – boy and girl – having a rare (fictitious) disease that makes their heart grow larger or smaller based on their emotions. This sets the grounds for some very sturdy adventures and is a great base for such a concept album. And the lyrics are exceedingly well executed too and aligned to the story – how could they not be.

I daresay that much thought went into crafting the tracks themselves. And a lot of detailed and painstaking work invested in the production, mixing and mastering. And it shows. No complaints there.

Now, Phantasma served themselves from a number of influences.

Avantasia for sure, but also a strange mix of Nightwish and an early version of Within Temptation – just think of the era of Enter. Spice this stew up with some Xandria-esque interludes and you about got your menu straight.

I could go on adding influences, and this is the major weak point of the album.

It does however not stand out well from the crowd. Okay, the fact that The Deviant Hearts is a theme based album does actually put them apart, but the overall style is too polished to really get a good grip on this slippery rock surface. There are no needle sharp points, no scratch – nothing.

And I am puzzled: Loudwire indeed managed to put the album on top of the November 2015 Release of the Month list, and it is on the list of a few other somewhat belated 2015 best of publications. But only a handful of reviews show up when you start looking for them.

So, back to the question above?

Oh yes, it does deliver, but on oomph and power, Phantasma could have taken it up two gears and stepped on the gas a little.

Yet, already the intro Incomplete shows you what they can do. I was very surprised to find a ballad at the very beginning. A very courageous move of a bunch of musicians very sure of themselves.

The Deviant Hearts – the title song – starts of with a classical guitar / piano opening, already making me fear I landed in sugarbabe land of rosy pinkness. But then luckily launching into a much more powerful song of a more typical Symphonic Rock and Metal type. One with a nice chorus and containing one of the few solos in this bunch of tracks. The third track Enter Dreamscape really got my attention, like right away. A Nightwish-esque tune, starting soft, then going strong a little while later. Good one.

You know, I spoke about free-wheeling creativity before.

The Lotus and the Willow breathes this with a vengeance. Almost soft rock in style, laid back and dream-like it actually manages to deliver to pretty sturdy solo. Now, Crimson Course – the next track – will add renewed energy to The Deviant Hearts. A welcome change to the previous song.

Let’s move to the end. Novaturient is a treacherous little puddle of molten rock. First getting you into ballad mood with the intro, then taking off Power Metal style with a speedy song that will really rock you along. And I really like the solo in this track, good stuff. Then comes the centerpiece. Well, yeah! At the end, but this is where it sits. The last track Let It Die is a well-rounded piece of work and sounds somewhat like early Delain as in April Rain.

The end is actually good proof of the pudding. First, Deviant Hearts does not lose any energy towards the end. But actually gets us a very good final delight of an already very good album.

Will Phantasma make it to the divine halls of rocky greatness?

Not sure, but I admire the album for what it is: A very good, kind of epic theme project, expertly executed by very, very good musicians. And I really love its progressive side that is so unlike what we usually get from Delain.

Should you buy it? If you like story based albums – absolutely. If not, well, give it a shot anyway. I really liked what I found.