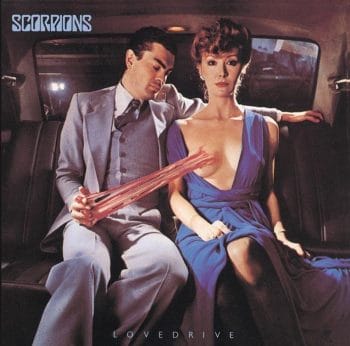 It was the album art that drew me to this particular Scorpions album at first. Yeah, the sticky finger one. Of the guy who wanted to go a-touching, and paid the ultimate price. In a truly adolescent setting to boot.

These were the times of all kinds of surreal shit on album covers. And much more provocative ones than this one, too. This delicious rebel streak is long gone, unfortunately, and replaced by whitewashed rosiness of uniform political correctness. And some of them covers were decidedly tasty.

Oh, and did I mention it? Quite unsurprisingly and as always, the cover led to considerable controversy in the US, where double-standards are always the norm. And – hey – maybe the RMR crew will do a contest for the weirdest record covers ever one day. Who knows?

The obvious qualities that the 1979 record Lovedrive really delivered to the turntable became visible only much later. These were times, when music was consumed like drugs, audible things that gave you a kick in the present. Without much thought to actual quality, as long as it came from your favorite band or genre. But come to think of it, this sounds a lot like today’s youth and their earphones endlessly glued to faceless streaming services. Even if today’s habits are more consumer-heavy with much less polarization.

Lovedrive really was a turning point in the career of the Scorpions.

First of all, Uli Jon Roth did not partake anymore, replaced by Mathias Jabs. Looks like Scorpions lost them guitarists like other people keys back then. We’ll always remember the defection of one Michael Schenker to UFO earlier in the decade, no prisoners taken. And by the time of preparation of Lovedrive, the brother of Rudolf Schenker was pretty much already on his parting legs from his new part-time alma mater.

And – full drama on display – Michael Schenker got on lead guitar again after his departure from UFO. On the metal tracks like Another Piece of Meat or Coast to Coast. Which of course led to the immediate departure of Jabs, who had to be painfully brought back, after young volatile Schenker left again during the follow-up tour.

Lovedrive was also the album, where Scorpions – as the lore goes – started to introduce ballads into their tune, and as a matter of policy. And what a smart move this was. This mix between fast-and-furious and deliciously slow is just irresistible. This modus operandi continued to great success with later albums like Blackout or Love at first Sting. Those records that spawned evergreens that will forever be in the legacy of this band.

It was also the very first record that charted to any major degree. It actually ended up on rank 55 of the US Billboard 200. A pretty neat feat, as the US market was pretty predominant in the late ’70s.

And if ever there was an album acting as a wolf in sheep’s clothing, Lovedrive is the one.

At first listen, all of them songs kinda float by without effect like so much water under the bridge. The silly hooting on Loving You Sunday Morning just made my brain switch off.

Well, pretty much until Is There Anybody There rushes onto the stage. This metal-infused reggae piece really stopped me dead in my tracks. It amazed me, how they slammed this groove onto a terribly simple song structure. And then, this piece is completely out of whack in style, and thus breaks the flow. But – in a way – and by that same token, it made the album come together.

Then – lo and behold – after a pretty weak start, already Another Piece of Meat got me in a Heavy Metal mood. Way beyond the Hard or Heavy Rock we would expect from a piece of the ’70s. Klaus Meine and his soaring vocals really start to shine on this track. And check out the solo, which just made Roth’s departure evaporate in a cloud of forgetfulness.

The icing on the cake definitely is Lovedrive, the title track. Not because it is so absolutely stellar. But because Scorpions gallop away in best Iron Maiden fashion with a whiff of NWoBHM to come. And those folks weren’t even invented yet by the time the record released. Some subdued, but decidedly metal screams included. A vibe that struck hard on Can’t Get Enough as well, this time complete with scratchy solos that just take the cake.

Yet, as is often the case with this band, the lyrics are weak tea, and this record is no exception. They more seem to use words as a means to scream refrains off the stage than anything else. But let’s put things in context some. This is also quite often the case with other bands from this era.

And then there is this production thing. At least in the early days of the Scorpions, I often find myself in treble hell. Every time Lovedrive fires up on the RMR sound machine, my ears kinda give up the ghost and leave the building. I am really unsure what got into the sound engineers of that time. Even for the equipment of some 40 years ago, this sounds terrible.

But in the end, Lovedrive nonetheless is the beginning of new era. One of those corner stones that let the Scorpions drive on to great success. One that continues to this day.

The record also revives the ever-returning question, if the band’s style was Hard or Heavy Rock, or an early version of Heavy Metal. And frankly, the record indeed includes early versions of both. But the metal parts definitely dominate over everything else. So, in a way, the album can be seen as a precursor of things to come a few years down the road.

And with all the drama, new directions and frankly a cool tune, Lovedrive is and will remain one of the best albums Scorpions ever produced.

Ed’s note: Congrats, the album successfully made it onto the newest issue of the Old’n’Tasty series.