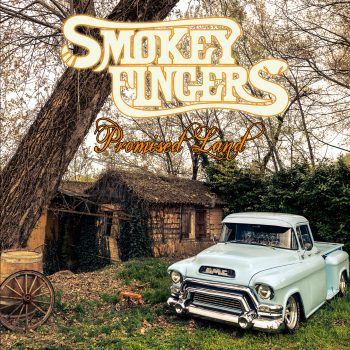 Sometimes it does the soul good to be transported to yonder laid back times of Easy Rider (the film), Doc Hollyday, Lynyrd Skynyrd, Creedence Clearwater Revival and the likes. Just makes you want to put on your cowboy boots, hunt for these tight jeans, don a Stetson, and go a-cruisin’. Down them dusty highways, across broken service stations to stop at a saloon in a windy town for beers, burgers, and fun.

Now, when I first saw the trailer Smokey Fingers issued, and these guys talked in Italian, I scratched my head, not sure where this was all heading.

But then you start twirling Promised Land and out comes stellar Stoner Rock of the Southern kind, (Italian tainted) drawl and all. And this seems to step right out of Louisiana, greeting you with a whiff of Texas (the band) and Blackfoot. Looks like our Canadian buddies from Vinyl Hero got some stiff competition after all.

But let’s take a step back!

The band actually joins us from Lodi, but in Italy, not California. The band states that their Southern Rock prowess was picked up when backpacking across the Southern States in the US of A. Well, hells bells! That is some pick-up indeed. Smokey Fingers have been around since 2008 and produced a first EP Columbus Way in 2011.

Already their album cover got me smiling, featuring this GMC old-timer pickup from back in time. This same vehicle by the way also features in their official video The Road is My Home.

I always love it when people try to pass the Italian backcountry for the American South. But hey, well done nevertheless. Gorilla Pulp did this already once in Peyote Queen, and they were famously called out by the trademark garbage bins so prevalent in Italy. But more to that later.

The album sticks straight with this dusty, scratchy sound that seems to step right out of the 70’s and early ’80s. Clearly, this is by no means a sound that we have not heard before. But their refreshing, bluesy interpretation of a genre where many have been before, will make you want to spend more time with this album, believe me. And sometimes they sound like a version of Bear Bone Company or Rattleplague without bourbon.

The fair variation of song themes, different country instruments, stellar riffs and solos, plus the smokey voice of Gianluca ‘Luke’ Paterniti gets you this wholesale Southern feeling. Makes you want to check out them cotton fields in Alabama. Adding to the apparent good quality of the record is the relatively large number of guest musicians.

Now, the album gets off to a great start with a good, but nevertheless pretty mainstream Black Madame. The cherry on this Southern Rock cake, however, greets us straight after that with Rattlesnake Trail. This is by far the best track on this album, featuring a superb solo.

The aforementioned The Road is My Home will saddle you with a mid-tempo, laid-back country style rock piece. Check out the video. The track really feels like cruising along the highway.

No flaw in the Promised Land, then?

To sustain 12 tracks, you need to build in a lot of variation. And this is mightily difficult in such a genre. In this light, a sharper selection of tracks and – consequently – a slimmer, smarter track list would have been better. The songs themselves towards the end suffer from undue repetition, which takes a lot of the spice away. That said, the song structure gets some of the later tracks sound like a country rock version of AC/DC without Brian Johnson.

But these are small pickings. And it does not mean that the songs farther down the track lists are bad at all. Their tune genuinely takes on some speed towards the end, too. I would particularly recommend The Basement, Thunderstorm, the slower Last Train and the very last track, a ballad going by the name of No More.

So, did we reach them Alabama cotton fields at all?

Smokey Fingers have created a rock solid full-length album with Promised Land that stands up to the best in Southern Rock today. If I would not know they dwell in Lombardy, I would have placed them somewhere near Nashville, TN. I kid you not.

The whiskey laden, scratchy, bluesy sound they provide is a pleasure to behold and smacks of authenticity that many natives cannot offer easily. So, if you fancy hot, steamy rock to be consumed with a Bourbon, then this is your album. Go for it.