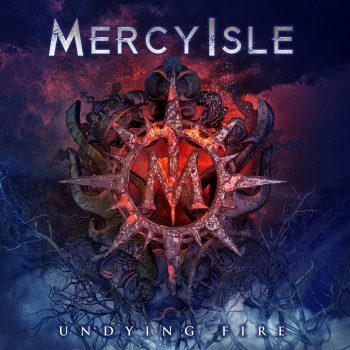 The Gothic and Symphonic Metal universe out there did not necessarily thrill me in 2016 (or even before, for that matter). After the general salivating on these genres stopped, many of them bands have not quite gone where no man went before and developed their tune further.

Instead most like to take the lighted safe road and just produce the same thing in a different robe all over again. Now, some have seen the light (no pun intended) and started to put refreshing energy back into what never was. For instance, Diabulus in Musica and Epica both issued pretty sturdy new records that got my hopes up again. It is also fair to say that the many copy-cat soundalikes that pour in from the East are not necessarily helping to revive the genre neither.

So, it is a good thing that one comes across bands willing to be the flame bearers and step beyond the trivia trying to flood us. We are speaking about Mercy Isle and their 2016 debut album Undying Fire. You could easily dismiss them as just another one of THEM. But only at first sight. Because once you start to listen to this pretty varied metal pizza, you just might start to think otherwise.

The band got life injected back in 2014 by Kassandra Novell, the vocalist. They then soon got going with a couple of singles and a first EP in 2015. Now, the Dutch/American six-member band followed up with this here record. Mercy Isle secured themselves the assistance of Sander Gommans (After Forever, Kiske/Somerville, Trillium) and Amanda Somerville (Trillium, Kiske/Somerville, Avantasia). Amanda is also known as guest vocalist for Epica, just to pick the most famous one. She can actually be heard together with Kassandra on this mighty gothic platter in Saying Goodbye.

When first hearing about the size of the band, I expected another one of those loud, overly brickwalled productions that bores down on you like a runaway truck. On top they boast a gazillion of guest artists on this album. You could probably fill an orchestra with ’em. And Undying Fire is indeed loud. But – hey – kudos to the mixers and masterers of the record. This disc isn’t about to stumble all over itself and make a mess. And no-one will steamroll over you whilst lustily playing on. In addition, they also kept their epic tastes in check and did not go overboard like some of their brethren like to do.

Now, I really got a kick out of the lyrics. It looks like these folks don’t only play lustily, they are also lustily vengeful on some subjects. Things like – and I quote “…It’s comfort to know that everyone dies / Especially you..” or “…I am the fire come for you / I’ll burn you to the ground…” just fire up my Black Metal infused instincts. Whilst Undying Fire is not that at all, of course. But by and large these are not just words from the machine, but well thought out lyrics with a tune that speaks in tandem. I like it.

Now their style does not really deliver anything new. The whole record positively screams Gothic and Melodic Metal (or rock for some tracks). You’ll hear Delain-ish tainted melodies flowing over to you, sprinkled with a spoonful of Nightwish for taste. Together with kind of a re-invented duet that Within Temptation used to grace us with in Saying Goodbye. In essence, Mercy Isle deliver a cartload of varied and innovative tracks, plus a refreshing new wind injected into an oldish genre.

Now, let me point out the stellar, yet somewhat underused vocal powers of Kassandra Novell. Big outcry, right? Underused? Well, she really impresses with a wide variety of styles and intonations throughout the record. But wait until you hear her belting out towards the end of Uncaged. Holy metal cow, attagirl! I wish she would have turned the volume up like that more often.

As the track list goes, the electronics at the very beginning did fill me with dread. At first thinking we were revisiting yonder and long bygone days of Kim Wilde. But luckily, we got ourselves a Wake Up call. The record then rocks into a reasonably stormy, but fully in-genre track called Storm. Three out of the ten tracks in Undying Fire are by the way recycled from the EP Storm. OK, spruced up they are indeed, but still. Those are Storm (well,yeah..), No One Will Save You and the aforementioned Uncaged.

Now, whilst the record not necessarily trespasses onto the unknown and nothing is overly hard on your ears, it definitely shines with variety. They also kept the terrible synthie toy in check and did not go full pop-rock like Amaranthe likes to do. You’ll find rockier pieces, but also cheeky, almost downright evil tracks like I Am (one of my favorites, by the way). As ballads go, check out If I could and the previously cited cheese-ball Saying Goodbye.

To conclude, Undying Fire reaches back to the roots of the Gothic and Melodic Metal universe. Whilst not necessarily breaking new ground, they bring back this freshness that was so prevalent back in time, when the pioneers were all the rage. This and carefully crafted, expertly executed tracks deliver an album to your earphones that will be worth your time. Great debut, well done.