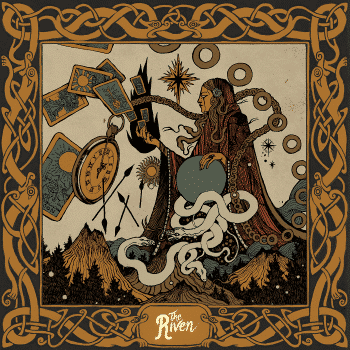 This groovy grind was already visible when The Riven released their 2017 blurb Blackbird. This good ‘ol whiskey fueled rock, filled with stoner-esque pleasures to the brim. The good old times of sensual rock suddenly beckoning you all over again.

You do find them still, them bands with a style that kinda went out of fashion many years ago. But not so often anymore. Dirty Sound Magnet in their old incarnation was one. Or again Last Bullet or Hey Satan with their grouchy, stony beat.

But a band sounding like a mix of the gravelly voice of vocalists like Janis Joplin and the swagger of Patti Smith combined is rare. And yeah, The Riven serve an old-style and sometimes exceedingly heavy Blues Rock. With a tot of Southern Rock on a groovy bed of smokey vocals and comfortable fuzz. Like a Deep Purple and early Led Zeppelin revival all in one, but with a female front. And then throw some ragged Punk Rock into that mighty stew, and you got yourself a pretty hefty composite of sharp-edged rock.

The Riven really dug deep into that dangerous box of long-gone tunes, of coarse, dopey rock that we thought dead since Woodstock kind of happened. Of ideas Black Sabbath concocted with their friends, way back in time when LSD was cheap and abundant. Because these days you really need to find your audience. Or else you’ll not make a dime on your shit.

Now, everything kind of revolves around Totta Ekebergh in this roughly hewn piece The Riven sent our way. A vocalist is a vocalist one could argue, true. But here, there is a thing like too much voice in an album. Like in overwhelmingly too much. Which risks to reduce the rest of the band to so many studio musicians. Even if this most probably wasn’t really their intent.

Yet again, The Riven rightly understood that all stands and falls with their female front. So, they constructed the sound to suit her voice, and almost went over the top. But in contrast, you got moments on the record, where this worked really well and she truly shines. Like in the R’n’B piece I Remember, which is just sublime in all its fuzzy fashion and slow-motion bluesy splendor.

I would also have liked a proper lead guitar in this band of four. The catch-all provided by Arnau Diaz, although expertly played, sometimes leaves room for some depth. However, this provides enough much needed space for Max Ternebring‘s bass guitar to come forward and shine. A bass with a voice, that’s what we prefer over here at the RMR offices at any time. Not that locked-in garbage that most bands often serve. And which always makes me wonder what on earth they have a bass dude for.

The record itself gains pretty sturdy momentum in the second half. Astounding, ain’t it? The first few tracks are okay, not more and – for sure – not less. Yet with Shadow Man The Riven start to lace their concoctions with some serious juice. With Finnish Woods intriguing the hell out of me. But the last three tracks – I Remember, Leap of Faith and to a lesser extent Sweet Child – put some serious relish on this dish of wannabe vinyl delights.

It is interesting how The Riven put the pedal to the metal of this buffed up old Cadillac, and make it shine as the record putters to an end. We should have had more of those, not that kinda weak tea we got served in the beginning.

To put a tent around this particular circus, it is surely difficult to carve a niche out of a genre that has already been re-invented a gazillion of times. In other words, it is not the comfiest area of the rocky multiverse to choose from. But here, The Riven present us with a tune that would have been all the rage back in the ’60s and ’70s.

It is of course also true that the audience for that kind of sound these days is somewhat limited. On the other hand, old-style bluesy retro-rock, heavily played with a lot of gusto, for sure never lost its attraction and draws on a faithful fan base. Especially as The Riven expertly mix a variety of styles together. With the tremendous voice of Totta Ekebergh as the icing on the cake.

And it is this savoir-faire and the mix between hot, beery rock and the smokey voice of the vocalist that make me put my boots on the table, and reach for another glass of bourbon.

There you go, sold.

The Riven‘s self-titled album will release beginning of March 2019.